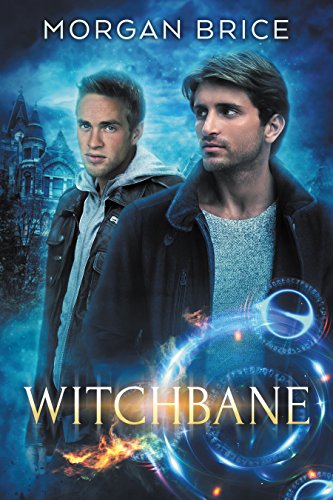 And, I’ll be launching Witchbane with a fun-filled weekend at Coastal Magic 2018 in Daytona Beach, FL, a great place for romance authors and readers to meet!

Here’s the scoop on Witchbane:

Seth Tanner and his brother Jesse’s fun evening debunking local urban legends ends with Jesse’s gruesome murder. Seth vows revenge on Jesse’s killer–too bad the murderer has been dead for a hundred years. Seth uncovers a cycle of ritual killings that feed the power of a dark warlock’s immortal witch-disciples, and he’s hell bent on stopping Jackson Malone from becoming the next victim. He’s used to risking his neck. He never intended to risk his heart.

Witchbane is the first in a series, with more coming later this year. Expect to see my Badlands series launching this spring. So many sexy slash supernatural stories to tell!

Want to be an insider?

On Facebook, my group The Worlds of Morgan Brice is THE place to get the scoop, read excerpts, find out fun facts and photos, fantasy cast the book, maybe even do some flash fiction prompts and contests!

Follow my Morgan Brice board on Pinterest.com/gzmartin for photos of the people, places and things that inspire the books!

Morgan Brice is the romance pen name of bestselling author Gail Z. Martin. Morgan writes urban fantasy male/male paranormal romance, with plenty of action, adventure and supernatural thrills to go with the happily ever after. Gail writes epic fantasy and urban fantasy, and together with co-author hubby Larry N. Martin, steampunk and comedic horror, all of which have less romance, more explosions.
On the rare occasions Morgan isn’t writing, she’s either reading, cooking, or spoiling two very pampered dogs.
Watch for additional new series from Morgan Brice, and more books in the Witchbane universe coming soon!

Download my free sampler–first chapters from Witchbane, Burn and Dark Rivers, plus Badlands–and a sneak peek at Lucky Town and the Rising!

The Sampler is free on my Google Drive–your choice of ePub, mobi (Kindle) or PDF. You’ll also find series synopses and links to purchase the books so you can keep reading! Enjoy–and thank you for choosing to spend your reading time with me!